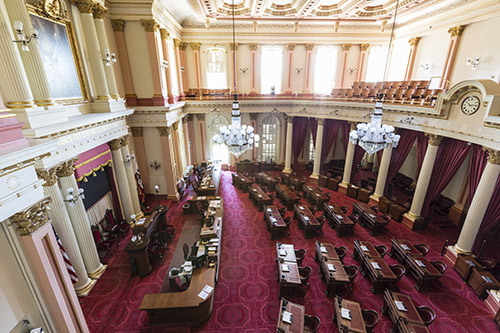 California’s Assembly Bill 315, which takes aim at Pharmacy Benefit Managers (PBMs), recently cleared the Assembly floor, and is now headed to the Senate for consideration. This legislation establishes a series of reporting requirements designed to increase the transparency of PBM practices and identify the market inefficiencies that may be driving up the cost of prescription drugs.

Currently the PBM market is highly consolidated, with the three largest PBMs representing roughly 75% of the total market share. The concentration of plans represented by only three PBMs is necessarily anticompetitive, but it is not an inherently deleterious development with respect to delivering lower drug costs to consumers. Indeed, the negotiating power afforded by such a concentrated market share necessarily lends itself to leveraging substantial concessions from pharmaceutical manufacturers during negotiations. Problems arise when these savings are not realized by consumers’. PBM profits have soared over the course of the last decade, while consumers and insurers alike are increasingly burdened by escalating drug costs. And while PBMs contend that pharmaceutical price increases are not a reaction to rebates and other discounts that they negotiate from manufacturers, it appears as though consumers and insurers have sold their collective bargaining power to the lowest bidder. Consumers certainly do realize some cost savings due to a portion of rebates PBMs pass back to insurers, but when PBMs report profits in the hundreds of billions that are seemingly buoyed solely by their exclusive market position, one must wonder whether the distribution of savings even begins to approach equitable.

The bill introduced by Assembly Member Wood attempts to empower healthcare end users by mandating the disclosure of aggregate data concerning price concessions that PBMs receive from drug manufacturers. With a more accurate and transparent picture of drug pricing, insurers can negotiate better rates for their beneficiaries, producing cost savings across all plans.

In addition to disclosure and transparency measures, AB 315 has proposed a novel measure to ensure PBMs do not continue to take advantage of insurers and the patients they cover. It would establish that PBMs owe a fiduciary duty to the insurers that they contractually represent. By creating such a fiduciary relationship, the bill would prevent PBMs from using their position to advance their own private interests, theoretically obligating PBMs to pass any negotiated savings onto insurers, who could then pass savings onto their beneficiaries. In practice, however, it is unclear how this relationship would be policed by the courts. It will be interesting to see how the language of this component may evolve in senate deliberations to better define what the fiduciary relationship will entail for PBMs.

PBMs are certainly not the sole cause of rising drug prices, but the sheer profitability of PBMs in their role as intermediaries belies their role in burdening patients with escalating costs. In creating a more transparent view of how money flows through the healthcare system, AB 315 would serve as a starting point for unraveling what other market factors are contributing to the rapidly increasing cost of prescription drugs.

To learn more about this bill and the issue in general, please visit the website of the newly formed Alliance for Transparent and Affordable Prescriptions (ATAP), which seeks to elucidate and reform the role that PBMs play in the delivery of healthcare. You can also follow the group on twitter (@ATAPAdvocates) for timely advocacy updates!