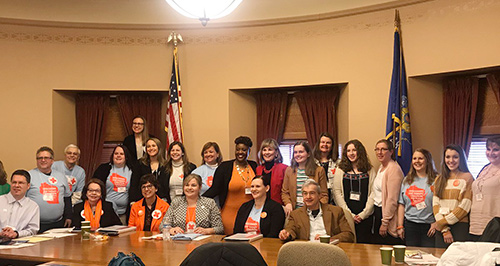 CSRO, in partnership with the Wisconsin Step Therapy Coalition is taking the lead on step therapy reform in the state. Measures have been filed in both WI chambers addressing step therapy protocol reforms for prescription drug coverage. Provisions in House Bill 24 and Senate Bill 26 include establishing a concise and transparent process for step therapy exemption requests and appeals, specific response timelines to be followed, and the requirement that all exemption decisions be based upon clinical review criteria guided by a multidisciplinary panel of experts. Both measures are currently expected to be heard in committees near the end of March.

In attempt to move the bills through the legislative process, the Coalition hosted an Advocacy Day on March 6 and dozens of advocates were in attendance. Patients and representatives from the Coalition organizations had in-person visits with legislators to ask for their support. Both bills have several sponsors and the Coalition expects even more legislators to co-sponsor the bills in the coming weeks.

A news anchor from Spectrum News 1 covered the Advocacy Day at the Capitol.

Additionally, a WI patient advocate and rheumatology clinic administrator, Nilsa Cruz, wrote a letter to the editor of the WI Ozaukee Press highlighting the challenges both providers and patients and why reform is needed. “Step therapy is unfair, often forcing patients off doctor-prescribed medication onto new ones that can be ineffective. This creates painful delays for the patient,” Cruz stated.

CSRO currently has an engagement set up on the website for membership to use to send a letter to WI legislators urging them to support SB 26 and AB 24. This engagement is located on the second page of the Action Center page. By simply clicking on the Wisconsin designated link, and entering your general contact information, a letter will be sent directly to your assembly and senate members urging them to support these failfirst reform measures.